I know we all hang on to things when we get something new. I’m just as guilty as everyone else in this department. But tonight I thought I would try an experiment to see if it would help solve a problem when we travel. 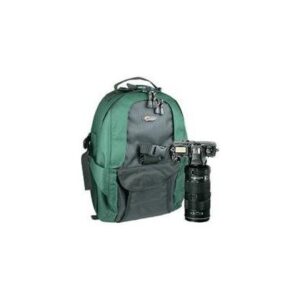 When ever we travel across to France on the boat I never like to leave anything portable and valuable in the car, so I take my camera gear, netbook, iPod, etc in various cases up to the cabin. With the addition of the netbook to my ‘load’ I’ve been carrying an awful lot of stuff up 4-5 decks to the cabin.

My favoured camera bag the Orion AW is full of camera gear and the rucksack part has no dividers or structure to it. So anything hard in that part makes it quite uncomfortable to carry. So I’ve been carrying the netbook in another bag.

Tonight I had a brainwave and got out my previous camera bag a Lowepro Mini Trekker. I had stopped using it a while back because I didn’t find it that comfortable when carrying it for several hours. Also it can carry a lot of camera gear, and thus it can be quite heavy!  But for travelling it might be the ideal solution. The outer pocket on the front takes my netbook with plenty of room to spare at the top of the pocket. Inside I can get all of my camera gear slotted in with no difficulties at all.

So tonight I tried fully packing it as I would to go away to France and it all slots in neatly. The main advantage now is I will have everything in one bag not two or three, sure it’s heavyish, but I will not be carrying it far fully loaded. I can take some gear out once we get to the house.

Oh and before you ask, no I won’t be getting rid of the Lowepro Orion AW, it’s great for photowalks!