I have had an iPod Touch for over a year now and it is a great device, but there are times when I wished the screen was bigger or the camera was better.

When they announced the new iPad (3rd generation) last week it didn’t take me very long to decide to order one. I had to order it via the French Apple site which wasn’t too much off a problem, we got there eventually!  And on Friday the UPS man arrived after calling us earlier to confirm his ETA with us, what great service!

So a few pictures… 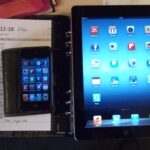 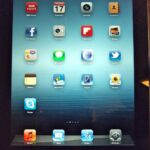 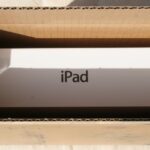 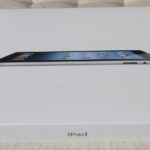 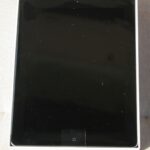 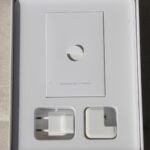 I bought the 32Gb WiFi only model in black, running a 4G model here in France like running an iPhone here would be expensive, and I don’t ‘need’ the connectivity everywhere I go. I have discovered several free Wifi hotspots in places we regularly visit. For UK visits I have a T Mobile Wireless Pointer 3G/WiFi modem which works just fine. Your ‘needs’ might be different to my own…

So what is it like? Big… the display is excellent. I’ve used previous iPads and other tablets, but not for any length of time, but the display on the new iPad is just so pin sharp it will take a lot of beating. The on screen keyboard is easy to touch type on after you have adjusted to the slightly different layout. Voice dictation works quite good as well and is fairly accurate.

Setting it up was very easy, as I’m a Mac user already I’m using Apple’s iCloud service so a lot of settings where transferred across and set up straight away. All my apps that I use on the iPod Touch where installed automatically. So I was up and running quite quickly. I’ve had two lengthy sessions of using it including this morning, this post is being created on the iPad!

With the iPod Touch I have been using various apps to do things that you can’t easily do in the web browser on that size screen, so I was able to uninstall quite a few apps off the iPad as the are no longer required. They will remain on the iPod Touch though, and iTunes manages that fine.

I worked out that with Home Share, I don’t need to install any music on the iPad, or very little. I can stream my music from my iMac when I’m at home and if I’m out, then I will use my iPod Touch still for music, device size really. To do this you need to turn on Home Sharing and access it via the ‘more’ menu in the Music app.

I’ve added a few iPad apps that make better use of the bigger display, Pages (Word Processor), Numbers (Spreadsheet) the new iPhoto app, which I’ve only briefly used so far, but I use it all the time on my iMac. Skype for iPad is excellent and I’ve used Facetime with my son (another new iPad owner!) and that works very well.

I was surprised at a few of the built in apps on the iPod Touch aren’t also on the iPad, they include the Clock, Stocks, Weather, Calculator. But there are plenty of these type of apps in the app store and really an iPad calculator is a bit big!

After using the iPad for a couple of hours yesterday I picked up the iPod Touch and was immediately shocked by how small it seemed in comparison.

Then it stuck me…. there is a parallel here. As a dedicated Filofax user, readers of the Philofaxy blog will see this comparison straight away…. The iPad is size wise very similar to an A5 Filofax, slightly bigger in fact, whilst the iPod Touch is very similar in size to a Filofax Pocket, slightly smaller in fact.

Now Filofax users love the size of the A5 because of all that extra page space you get, but they don’t like the size of the organiser when it comes to carrying it around in their bags, it’s too bulky. In a similar way they love the small size of the pocket Filofax organiser because of it’s small size but then they have issues with fitting all of their life in to the smaller page size…. so as a compromise they tend to end up using the personal size Filofax organiser… this isn’t perfect as a page size, some would say the page is slightly too narrow….  There isn’t an Apple product that fits that size comparison… but the Amazon Kindle is close… and any other 7″ tablet PC…  So yes a 7″ iPad would in my opinion be a great device.

That said I’m loving using the iPad, it’s very easy to use, as with my iPod Touch finding settings and getting things exactly as you like them to be is quite intuitive.  Filofax users might be concerned when I admit that the calendar app on the iPad is actually quite good, I’ve not been using an electronic calendar much in the last year or so, but iCloud has restored my faith in not duplicating calendar entries so I might start using the calendar a bit more, but I will not be giving up my faithful Filofax organiser… it’s just quicker to use… honest!

I’ve got a carrying case on order, but I’m waiting for the makers to catch up with some form of case for the iPad to live in all the time. It’s quite heavy and slippery and me being as clumsy as I am I’m afraid of carrying it around in it’s naked form!

I will do another post in a few weeks time once I’ve settled on which apps to use etc.